I freely admit to being kind of an infrequent blogger.

But anybody out there who's truly yearning for news about Polly Moller & Company gigs, now has an alternate news source in CatSynth.com. This is because we've welcomed Amar Chaudhary as our newest member and he posts more often. Bookmark CatSynth.com, and you'll be better informed than if you just surf by here.

The Works/San Jose show on Friday was our first with the Polly/John/Amar trio lineup. Ultimately, our live lineup will be a quartet with Jim Carr returning on bass guitar. We'd have included him in San Jose, but he couldn't make it. It's a long schlep from Kentucky to begin with, and he had a very important exam to take this past weekend, critical to his future career as a fully credentialed music teacher.

My next adventures will be solo ones -- first at the Luggage Store Gallery this Thursday, August 2nd, as a member of the 12-piece Improv Derby large ensemble. We will be conducted by David Slusser and MaryClare Brzytwa. Then, I will be travelling to Albuquerque on August 8 to participate in the National Flute Association's 35th annual convention. My flute quartet, "Remove Before Flight", will be played in the Saturday morning flute choir reading session. I'm hoping to get in some desert hiking, too, with Clyde while I'm there.
Posted by Polly Moller Springhorn at 12:49 PM 1 comment: 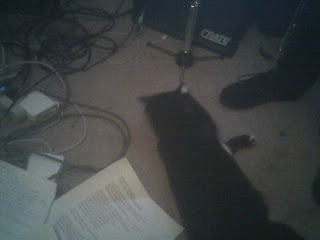 Rehearsal was solid and it ended with all of us confident about the gig tomorrow. I headed straight over to the Edgetone Festival show, already underway at the Community Music Center. I was just in time to hear the excellent duo of Matt Davignon and Tom Nunn, followed by Nihil Communication with Laurie Benafe, and the ever-tasty drones of Darwinsbitch. The audience was given a small listening speaker to pass around. It was built into a holey stone, which as Marielle confirmed afterwards had indeed been found on the beach. It had a long, long cord attached and when held up to the ear, gave the listener another perspective on the sound coming from the stage.
Posted by Polly Moller Springhorn at 12:04 PM No comments:

It was only a 4.2, but I live only 2 miles from the epicenter -- so it shook me awake big time at 4:42 a.m. I headed immediately for a doorway. And then it was over, with nothing knocked over and no cracks in anything. Yay!

I remember an earthquake that rocked my college dorm back in the day. It was in the 5 range, and it also occurred in the middle of the night. After the rumbling was done, the students whooped and hollered their approval. That's not something I've ever heard since then, after earthquakes.

Then of course there was Loma Prieta. I was on a MUNI bus 29 heading home from SFSU. We were stopped in traffic on 19th Avenue and suddenly the bus started to rock very dramatically back and forth. The impression I got at first was that a group of teenagers had possibly teamed up to rock the stationary bus. Then I looked at the lamp posts overhanging the M line tracks, and saw them twanging back and forth. It was then I realized there was an earthquake going on.

It took hours to make the trip from there to my home bus stop, with all the traffic lights out of commission. When I got to my apartment, I found everything that could be knocked over or fallen down, knocked over and fallen down. My roommate and I had a coat rack that had fallen over and jammed itself against the door, so I had to shove it open. The upstairs neighbors and I checked for gas leaks and found none. There were scary-looking cracks in my kitchen wall.

My roommate had been some distance away when the quake happened so it took her much longer to get home. By then it was dark and we started to hear the sounds of people roaming the neighborhood in an abnormal sort of way. An object hit our back door and shattered. We sat in the dark, listening to the radio, and ate almonds. Radio DJs were really scared and, as I realized later, blowing things way out of proportion. They actually said the Bay Bridge had completely fallen down!

SFSU classes were cancelled for the rest of the week. A pizza joint in the Outer Sunset offered free pizza, so we went down there and had a slice each. I experienced my first BART ride during that time, since the SFSU library was closed and music students had to go to UC Berkeley to do research for their term papers.

I remember calling up "The Wonder That Is Daniel" Magazin, who I knew worked in downtown SF, to make sure he was OK. He told a story of dodging flying glass in Union Square.

I had a flute student in the Marina district and I remember going to her apartment a week or so later to give her a lesson, and passing by some houses with supports under them with condemned notices on the doors.

What am I trying to say with all these reminiscences? That I was there, but I was awfully lucky. Many of us were there and escaped with just some fright and inconvenience. We could just as easily have lost our lives on the Cypress structure or on Pacific Avenue in beloved Santa Cruz.

It wasn't until years later that I saw the famous World Series game interruption, since I didn't have a TV that year. I'm sure that must have been awfully dramatic for viewers tuning in from elsewhere. They all must have thought California had finally fallen into the drink as so many have predicted.

In other news, the flute choir reading session that includes "Remove Before Flight" has been moved to Saturday morning, August 11th at 9:00 a.m. So if you are going to the National Flute Association convention and intend to hear it, that will be your new date and time.
Posted by Polly Moller Springhorn at 8:54 AM 2 comments: