Houston, we have a problem. Heavy sonic waves out of San Francisco are gravitating towards the pull of the full cold January moon. Icy lunar reflections beam with dark, stark, arcing sprites and luminescent waves, if only sound were to exist in a vacuum. Experience the lunar radiations and transmissions of Thomas Dimuzio and Scott Arford as seen only by the ear, and inspired by the full Cold Moon.

Thomas Dimuzio is one of unsung artistic figures whose influence and abilities have substantially outstripped his visibility. Composer, multi-instrumentalist, sound designer, experimental electronic musician, and mastering engineer, Dimuzio has been busy doing his thing(s) since the late 1980s with critically acclaimed releases issued by the legendary house of audio misanthropy, RRRecords and former Henry Cow drummer (and current Dimuzio collaborator) Chris Cutler’s well-regarded ReR Megacorp label. Equally fluent in a nearly every contemporary post-techno style, Dimuzio’s work clearly demonstrates an insider’s knowledge of older experimental musical forms such as musique concréte and electroacoustic, as well as contemporary ambient-industrial and noise. Thomas Dimuzio has performed and recorded as a solo artist and collaboratively with Chris Cutler, Fred Frith, David Lee Myers, Dan Burke, Due Process, 5uu's, Matmos, Wobbly, Dimmer, Negativland, ISIS, and many others.

Scott Arford has been an active figure in the San Francisco Bay Area underground noise and international media arts scenes since 1994. He has produced numerous works for sound and video including multichannel sound and video installations, live performances, CD and DVD projects. He was awarded an Honorable Mention in the 2005 Prix Ars Electronica. Arford's performances and videos have been featured in numerous venues including the Eyebeam Center For Art and Technology, New York; Govett-Brewster Art Gallery, New Plymouth, New Zealand; San Francisco Museum of Modern Art; Dissonanze 7 in Rome, Italy; LUFF Festival in Lausanne, Switzerland; Observatori Festival in Valencia, Spain; the Sounding Festivals in Guangzhou, China and Taipei, Taiwan; the LEM festival in Barcelona, Spain; Liquid Architecture in Melbourne, Australia; the Festival de Video/Arte/Electronica in Lima, Peru; Sonic Light in Amsterdam; and the Center for Contemporary Arts in Kitakyushu, Japan. Arford received a Bachelor of Architecture from the College of Architecture and Design at Kansas State University in 1991. He has taught courses in sound and media art at the California College of Arts in Oakland, CA. He is currently a Designer at EHDD Architecture. In 1995 Arford founded 7hz, a warehouse/performance space. From 1995 to 2002, 7hz was San Francisco's leading venue for noise and experimental music.
Posted by Polly Moller Springhorn at 7:00 AM No comments:

Where to get your Matt Davignon CD

You know you want one!
His brand new album is out:  Living Things.
So far my favorite tracks are "Saguaro", beautifully evocative of the desert; and "Mold", which is just fun.

If you would rather download it, you can get it from Emusic, iTunes or Amazon.
Posted by Polly Moller Springhorn at 5:56 PM No comments:

Posted by Polly Moller Springhorn at 4:26 PM No comments:

Probably one of the guys you want watching over you in the Imperial Valley.

Posted by Polly Moller Springhorn at 5:41 PM No comments:

Photographed by Tom on a Salton Sea "beach", made up of luminous white salt deposits and the moldering bones of thousands of fish, washed up in layers as the Sea became too salty for them. It is a surreal, eerie experience to walk on the spongy, powdery, crunchy surface. Environmental disaster up close.

Posted by Polly Moller Springhorn at 8:37 AM No comments: 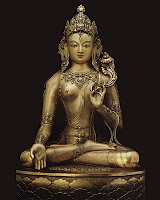 The events of this day in history, 2008, are beyond my comprehension still.

Having chosen life, I have no other choice but to keep going forward, into the present and future which have become relevant, bit by bit, a step at a time. Healing flows from my care for myself, and from the gods, my beloved, and my friends, family, caregivers, and colleagues.

The second half of my life is going on now, and insists that I pay attention and show up for it each morning.
Posted by Polly Moller Springhorn at 12:01 AM No comments: