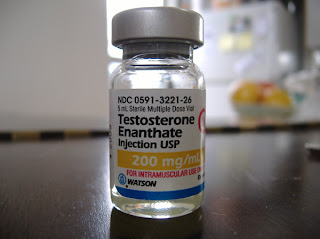 My friend and collaborator, Les Hutchins, is in transition. This is a photo of the testosterone that is part of that. It's a long awaited and contemplated transformation. I'm really excited that I get to see the early stages of it, because he's home for the holidays and working on visa issues and able to rehearse and hang out and gig with me.

(Appropo of which, I hope you will all come and hear us at the Luggage Store Gallery in San Francisco on January 3rd. The show starts at 8, and the gallery is at Market and Sixth Streets. Admission is $6.00 - $10.00 sliding scale. You will also get to hear Jen Baker play trombone and Damon Smith play contrabass. How can you pass up a great show like that to start off 2008? Come hear us!!!)

This transitioning, though, that Les is undergoing, means that I have to work on changing the pronouns I call him by. This blog post is part of that.

The only thing even close to this that I've done so far in my life is my effort to change the name I called my younger brother by. He used to have a childhood nickname which, when he became an adult, became unacceptable and understandably he wanted to be called Will, instead of that nickname. It took some practice to unlearn that nickname but I worked hard on it. Even when he wasn't around, I referred to him as Will, even to folks who were still calling him by that nickname behind his back. And after a little while, I was all changed over and "Will" flows naturally from my mind to my mouth when I'm talking about him.

It's probably because of my classical music training that I see any new skill as achievable mainly through repetition and practice. So here goes:

Les and I rehearsed this evening.
He and I will be playing duos and solos in our show on January 3rd.
He's got a wonderful vintage analog synth that will be part of the performance.
He will also be playing the digeridu.
When we're playing duos, he will be processing my flute and bass flute sounds in Supercollider.
And you should come hear him and me perform!
Posted by Polly Moller Springhorn at 7:09 PM No comments:

In my dream last night Phil Gelb and I were performing, apparently on an alien planet.

Phil was playing an exotic wind instrument that he doesn't normally play. I was playing what the dream defined as a shakuhachi flute, but it wasn't like anything I've seen in waking life. It had an inward curve and way too many holes. The holes were very small and there was no chance of covering them all with my ten fingers, so it was probably meant for a non-human player.

There were a couple of percussionists with us and a creature made of green slime who was also improvising. This performer didn't make any sound. His/her contribution seemed to be improvised movement. Some small globs of slime got on me as the show went on, and they were really sticky and hard to remove. It was a really fun concert and in the dream, I felt like I played well.
Posted by Polly Moller Springhorn at 8:01 AM No comments: