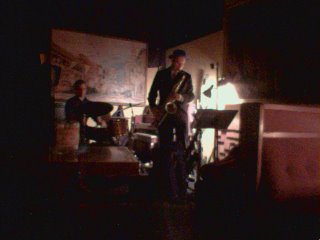 This is my first chance to blog about my trip to Portland. Yes -- I am the kind of person who vacations in rainy places on purpose!

K and I had a wonderful time. I got to hear Tim DuRoche and Jason DuMars, pictured above, at the Tugboat Brewing Company. They played very intricate headspacey retro jazz that was really appropriate for the venue. K lent me his PDA to take the photo.

I also got to hang out with Albert, whom I met at Breitenbush Hot Springs, and Rich and Daria who I know from Tribe. I enjoyed great food and great tea and a stroll around the Belmont District. I got to hear Rich's band, the Pleasure Seekers, at Duff's Garage. Their whole set was really good. K especially dug their cover of "King of the Road". I thought Rich's new duo project with singer Jo Alexis showed a lot of promise also. (They were the show's opener.)

It was a great trip. Now I'm back and buckling down to some serious reformatting of "Remove Before Flight" so it can be in shape for publication. The rough draft score and parts need to be tightened up so they aren't so long and fingerings need to be added for the multiphonics.
Posted by Polly Moller Springhorn at 2:35 PM No comments:

Paul & I have just returned from hearing astronomer Seth Shostak, astrobiologist Cynthia Phillips, and social scientist Doug Vakoch speak at NASA Ames Research Center. Their topic was what would we do if we found life out there? It was a very funny, populist-yet-brainy event which I enjoyed very much.

However, I was really struck by the experience of the Silicon Valley egregor. I've been living elsewhere for almost three years now, after spending 13 almost-uninterrupted years living in Mountain View, and each time I come back to the South Bay to visit, it's a bit of a culture shock. Sitting in that room at Ames tonight with about 200 denizens of the Valley I'm more than ever convinced that I just don't belong there, and I never did. The cold, hard, unrelenting, single-minded materialism is palpable. You can feel the sense that if a thing is not profitable, it's worthless. There isn't really any foothold for the arts in the Silicon Valley values system, and it makes perfect sense to me now that I was never able to build much of a following for my music there. I'm much better off in the City and the East Bay where intangibles are actually valued.

But I still got a kick out of the SETI presentation. I learned a lot and Seth Shostak is such a hoot!

Afterwards we went to Garden Fresh, a vegan restaurant in Mountain View that we have been going to since it opened in 1995 -- and found that the decor had been completely changed, that new menus had been printed, and that there was no one on staff that we recognized. It was kind of a shock. I looked around for the shrine that's always been there, but it was gone.

All the same things were on these newly-printed menus, but when the dishes arrived, not all of it tasted the same. The spinach won ton soup was the same. But the scallion pancakes didn't have enough sauce on them, and the steamed dumplings had filling that tasted subtly different. The dumplings also weren't piping hot like they have been all these years. And the hot and sour soup that Paul had, according to him, also tasted different. We left feeling kind of strange like we'd found out an old friend had moved away without telling us.

So anyway I sort of feel better knowing that it wasn't just me, or my work; it was Silicon Valley that didn't have a place for what I was trying to accomplish. I wish I had known that at the time, and reached out to the community in the City and the East Bay right from the start instead of wasting my time banging my head against that brick wall.
Posted by Polly Moller Springhorn at 9:36 PM 1 comment:

because I don't think that is what
she would want me to say.
Burn brightly in every flame,
blow fiercely in every storm-wind,
laugh joyfully in the throats of all the wolves,
Leigh Ann Hussey,
taken from your loved ones too soon.

I was only a fan.
I never got up the nerve to ask you
if you'd play a guest violin solo
on one of my CDs.

I suppose it makes sense
that a human body could only contain
a spirit like yours for 44 years,
instead of twice as long as can happen with quieter souls.
Posted by Polly Moller Springhorn at 6:30 PM 1 comment:

I'm just now getting a chance to blog about the Rock Lotto. It was the 3rd annual and it took place this past Saturday night at the Fishtank, a venue which belongs to Aaron Seeman, my old grad school classmate, who's better known these days as Duckmandu!

As soon as the first band (The Salvation Barmy & the Merchants of Death) took the stage, a cat ran full speed across the venue and hid somewhere backstage. She didn't look like she was having a good time with all the noise.

I was in Band #6, and we decided to go with that name, instead of picking a new name like everybody else did. Gino Robair was supposed to be the guitarist in our band, but he had to bow out on account of a procedure done on his back which resulted in doctor's orders not to lift anything or play instruments. So we were bummed about this and decided to dedicate our whole set to Gino. We wrote two songs about him and I wrote one that he suggested the title of, "Sausage Everywhere", which was all about a sausage rocket experiment on MythBusters.

Ferrara was also supposed to be in our band but he bowed out as well. So we were the Incredible Shrinking Band, down from a quintet to a trio. It was me, Michael Guarino, and Michael Mellender.

Gino actually made it to the gig and got to hear his songs. My favorite band of the evening was Myles Boisen, which was not really Myles Boisen at all, but a band that named itself after him. They were really tight. It was later revealed that they had four rehearsals, which is a lot for the Rock Lotto, and so it's no wonder they were really tight. The Sinking Swimmers were very cool too. They did a really groovy reggae song and dressed up in snorkeling masks and flippers. They also did a song about getting your heart broken by a squid. It was very B52's.

I was tickled to hear several homages over the course of the evening to the ascending chromatic riff served up so infuriatingly by Hammer Girth last year. Vicky Grossi, my former Hammer Girth bandmate, shared with me that Suki O'Kane actually played the recording of Hammer Girth doing that on KPFA -- and locked the studio door so nobody could stop it unfolding in all its maddening glory. It's said that people were pounding on the studio door trying to get it to stop. I am so into that.
Posted by Polly Moller Springhorn at 8:11 AM No comments:

Jim Carr is back in the Bay Area, and we're getting ready for our gig at the Art Performance Lab on Friday. We will play a 40-50 minute set containing 9 of my poetic and atmospheric pieces.

Jim's big news is that he is leaving Lexington, Kentucky and moving to Denton, Texas. His wife, Jennifer Lane, has accepted a tenured position at the University of North Texas.

And Jim's other big news is that he is about to order a custom-made Sadowsky bass guitar, to be delivered eight months from now. That's going to be amazing to hear when it arrives.

As for guitar player Jon Moreira, he is kind of paralleling Grant in that he is finishing up his undergrad degree at SF State, and getting ready to start a master's program there in music history. He is also learning Japanese as part of his grad school preparation. Lucky for me, unlike Grant, Jon's grad studies won't require him to leave the area, so we can still play together.
Posted by Polly Moller Springhorn at 3:29 PM No comments:

A Company Man checks in

I heard from Grant Gardner yesterday, the most recent former guitar player of the Company. He's finishing up his undergraduate degree at Rutgers, and he'll start his master's in Jazz Studies this fall. It's amazing. It seems like he only just left!

But the cool thing is he will be back in the Bay Area for a visit. It will be very cool to see him and catch up and play some tunes.
Posted by Polly Moller Springhorn at 5:30 PM No comments: