Album I'm on finally about to come out!

Quite awhile back I recorded some flute and bass flute parts and overdubs on the marvelous Scott Pinkmountain's epic, The Full Sun. I've heard just recently that the album is coming out on February 10th! Check out a review of it and be warned that I play on the track "Unforgiven" (along with 30 or more of my closest musical friends).
Posted by Polly Moller Springhorn at 10:02 AM No comments:

From the January 2009 issue of Flute Talk magazine:

"Remove Before Flight by Polly Moller is a two-movement quartet for two C flutes, alto, and bass that includes several extended techniques. In the first movement, "The Breeze", flutes 2-4 to play with residual and regular tone while the first flute plays whisper tones and multiphonics. The fast, driving second movement, "Takeoff", includes timbral trills in all voices and multiphonics in all but the alto parts. While the printed notes are not difficult, the extended techniques might require extra time to master the desired effects. It is an excellent piece for introducing those non-traditional sounds. ($12.00, 7:30, ALRY) D.B.S."
Posted by Polly Moller Springhorn at 9:52 AM No comments:

My friend Gary Mattingly introduced me to Niyaz on the way to last year's Yule ritual. He played me their album, Nine Heavens. I downloaded everything of theirs I could find the next day, and I think I've played the first track, "Beni Beni", ten times today. They are an international band based in Los Angeles. I have a new singing idol in their frontbeing, the marvelous Azam Ali.
Posted by Polly Moller Springhorn at 8:00 PM 1 comment:

We are reborn as Reconnaissance Fly

Reconnaissance Fly was a toy from my childhood. I say "was" only because nobody seems to know where he ended up. He may still be.

My brother Will and I used to play with him. He was a replica fly about as big as my hand, made of black rubber with clear plastic wings. He did a lot of flying around and reporting on other toys and different parts of the house so that led my dad to call him Reconnaissance Fly. His name is now the new name for the band formerly known as Polly Moller & Co.

The current band lineup has been together for going on 2 years now and it's by far my favorite. We will be taking off in some new directions this year in performance, touring, and recording. Since we are a band of composers, we are going to explore that, and expand to include all the instrumental talents of our members -- Amar's piano playing, Bill's homemade instruments, and anything else that suits our new work. I might even pick up the guitar again and see what might be coaxed out. As a lyricist I'm immersed in the mysteries of spoetry. There is a long-form multi-movement composition in our future, which will be performed live and recorded as a studio album.

The band name "Polly Moller & Co.", bestowed by my friend Matt Davignon in 2004, seemed appropriate at the time, a generic name for a band with a fluid lineup. But in year 2 of the post-Paul era, it's outlived its usefulness. Everything is different now. It's a new name in a new world.
Posted by Polly Moller Springhorn at 7:45 AM No comments:

I'm curating a monthly series for Outsound Presents and the Luggage Store Gallery. The shows will take place on the Thursday nights closest to each full moon in 2009. Different styles of experimental music will sonically represent the traditional lore and energy of each full moon, and the series kicks off on Thursday with the Cold Moon concert.

The composers and performers of Cold Blue Music, a label in Los Angeles, are traveling up to San Francisco to share their music for the Cold Moon. Here's the program:

All works are San Francisco premieres.

The Luggage Store Gallery is located at 1007 Market Street near Sixth Street in San Francisco. The show is from 8-10 pm and admission is $6 - $10 sliding scale.

Chas Smith is a Los Angeles-based composer, performer, and instrument designer and builder who, in the spirit of Harry Partch, creates much of his music for his own exotic instruments. His compositions, which always display his dualistic fascination with the scientific and the sensual, might owe their split personalities to the diverse collection of composers he studied with in the 1970s: Morton Subotnick, Mel Powell, James Tenney, and Harold Budd.

Michael Jon Fink’s instrumental and electronic music has been presented at numerous concerts and festivals throughout the United States, Europe and Japan. He has composed concertos for soprano saxophone, bass clarinet, violin, and cello, as well as incidental music for two plays by Wajdi Mouawad: "Forets" (2006) and "Seuls" (2008). As a composer/improviser with experimental and new music groups, he has toured here and abroad and recorded with The Negative Band, Musica Veneris Nocturnus, Stillife, Ghost Duo, Gods of Rain and Pickaxe. In recent years, he has increasingly focused on performing in solo and small group situations, exploring new sounds and forms on the electric guitar.

Rick Cox is a composer and skilled multi-instrumentalist whom guitarist/composer Ry Cooder called "the hidden master of the crepuscular and the diaphanous." Cox was an early explorer/developer of "prepared electric guitar" techniques His concert pieces, which often employ himself (electric guitar, woodwinds, and/or electronics) in the company of other instrumentalists, have been performed throughout the U.S. The British music publication The Wire wrote pf Cox's often lush and beautiful soundscapes for electric guitar and other instruments: "his enveloping harmonies are less innocent than they first appear. Prettiness with a tough core."

Read Miller is a poet, percussionist/drummer, and composer. After spending many years in the Los Angeles area, where he performed as a drummer in a number of jazz-based ensembles and a number of avant-pop groups, including the Dwindle Family Orchestra, the Improvisors’ Orchestra, Colin Gorman, Snakepit, the Red Poppies, Stillife, and many others, he moved to rural Virginia in the late 1990s. His poems have been published in various poetry periodicals. His musical and text-sound compositions have been recorded on the Advance and Cold Blue labels.

Marty Walker is a clarinetist who specializes in the performance of new music. (He has premiered nearly 100 works written especially for him.) Walker has toured and recorded with various new-music ensembles, including the California E.A.R. Unit, the Robin Cox Ensemble, Some Over History, eXindigo, Viklarbo, and Ghost Duo. As a soloist, he has presented live radio concerts on NPR, Pacifica, and other radio venues and has performed at numerous new music festivals, including New Music America, the International Festival of New Music, and New Music International, and various new music venues, including Real Art Ways, FaultLines, the Monday Evening Concerts, Knitting Factory, Podewil, and Wires.

Jim Fox’s music has been commissioned and performed by ensembles and soloists throughout the U.S. and presented at the Monday Evening Concerts, New Music America, Real Art Ways, Wires, the SCREAM Festival, the Ventura Chamber Music Festival, the CalArts Contemporary Music Festival, Podewil (Berlin), the Schindler House/SASSAS, REDCAT, the Ear Inn, L.A.C.E., and many similar venues. He has also scored feature films. His website is www.jimfoxmusic.com.

Posted by Polly Moller Springhorn at 9:00 AM No comments: 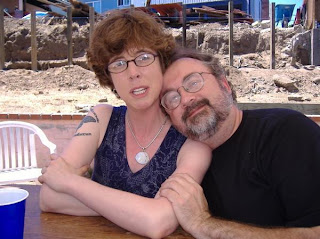 There is nothing I can say to the public internets that hasn't already been said.