The last Full Moon concert of the year will be the Long Night's Moon, on December 3. It features John Hanes and the 60 x 60 2009 International Mix. Come to the Luggage Store Gallery at 1007 Market Street near 6th Street, on Thursday December 3rd at 8 PM. Admission is $6-$10 sliding scale, but no one's turned away for lack of funds.

8:00 PM: John Hanes, also known as Organ of Qwerty, has been making music in the Bay Area for 30 years. He is currently playing in a number of ensembles, including Myles Boisen's Past Present Future, Phillip Greenlief's Citta Di Vitti, Marié Abe's O,Pomelo, and an un-named laptop duo with Rova's Steve Adams. John's piece for the Long Night's Moon concert will be an attempt to celebrate the promise of light inherent in the darkest night and the rhythm of the turning of the year.

9:00 PM: The 2009 60x60 International Mix is a recording containing 60 works from 60 different composers. Each composition is 60 seconds (or less) in duration sequenced together to create a one-hour performance. Highlighting the work of a great many up-and-coming composers, 60x60 testifies to the vibrancy of contemporary composition by presenting the diverse array of styles, aesthetics and techniques being used today.

Debuting in New York City November 2003, 60x60 started as an electroacoustic "tape" concert with its 60 short electronic works synchronized with an analog clock to mark the passage of each minute. Since then 60x60 has received thousands of audio submissions from more than 30 countries around the world, produced radio shows, collaborated with multimedia (including dance, video, sculpture, and photography) and released several audio albums on CD.

The 2009 International Mix features one-minute (or less) recorded works by 60 composers from all over the world, played continuously with a projected clock as accompaniment.
Posted by Polly Moller Springhorn at 8:00 AM No comments:

A couple of new video clips

These are new to me, anyway! Dancers are interpreting my one-minute pieces in two different presentations of the 60 x 60 Dance project, both at Galapagos in New York City.

Posted by Polly Moller Springhorn at 11:27 PM No comments:

I can't help but post this, because it is so very cool. It is by my uber-talented beau, Tom Djll. 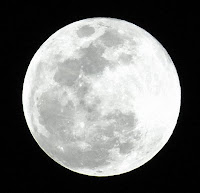 The Mourning Moon will be waning on Thursday night, November 5th, when the Mourning Moon concert takes place at the Luggage Store Gallery. You're invited to contemplate death and rebirth with Andrew Raffo Dewar (Alabama), his friends, and his music...featuring the composer on soprano saxophone plus Kyle Bruckmann, Gino Robair, and John Shiurba.

The Luggage Store Gallery is upstairs at 1007 Market Street at 6th Street, San Francisco. The show starts at 8 pm and admission is $6.00 - $10.00 sliding scale, with no one turned away for lack of funds. The series is sponsored by Outsound Presents.

8 PM: Piece for For Four Instruments (2002), dedicated to Earle Brown

Andrew Raffo Dewar (b.1975 Rosario, Argentina) is a composer, improviser, and woodwind instrumentalist. Since 1995 he has been active in the music communities of Minneapolis, New Orleans, the San Francisco Bay Area and New York City, and performing his work internationally. He has studied with saxophonist/composers Steve Lacy, Anthony Braxton and Phillip Greenlief, composer Alvin Lucier, trumpeter/composer Bill Dixon, and has also had a long involvement with experimental and traditional Indonesian music. Dewar has been noted as "having the rare ability to translate his knowledge into something beautiful" (Foxy Digitalis). The 2008 debut recording of his music on Porter Records was described as "absorbing" (Dusted Magazine),"enshrouding" and "evoking something unnatural and plugged-in" (Bagatellen), as well as "musical rainfall" and "absolutely essential listening" (Aquarius Records). According to Paper Cuts zine, "Dewar’s music is not a watered down copy or even a respectful imitation of other musical forms; it’s his own thing."

In addition to leading his own ensembles and performing in collaborative groups with known and unknown musicians from around the world, Dewar performs with and appears on several recordings by the Anthony Braxton 12+1tet and the Bill Dixon Orchestra. Dewar is Assistant Professor of Interdisciplinary Arts in New College at the University of Alabama.
Posted by Polly Moller Springhorn at 8:34 AM No comments: