My Full Moon Concert Series which I'm curating for Outsound Presents and the Luggage Store Gallery continues this Thursday night with the Quickening Moon. At 8 pm (ish) we have Theory Garden, and at 9 pm (ish) the VoxMaids. The gallery is located at 1007 Market Street at Sixth Street, San Francisco and admission is $6.00 - $10.00 sliding scale.

Theory Garden has been in various forms of gestation since 2005, led by Mika Pontecorvo with a varying cast of players exploring a range of improvised music from dark psychedelic rock to free improvisation to abstract electro-acoustic music. For the Quickening Moon performance Theory Garden will incorporate guitar, cello, flute, percussion, sax, trumpet, bass, and vocals and live signal processing via laptop computers.

VoxMaids is made up of JoJo Razor and Cynthia Weyuker, two veteran story-telling vocalists who use various instruments and loop boxes to create garden theater. The story of the VoxMaids is considered neo-folk story music, played out in moments of insanity and beauty. Lately they have begun the arduous task of combining music, performance, film, improv and ritual together to create a fertile ground for the source, or what they like to call Searching for the Voice of the Third. With the precision measurements of alchemists, Cynthia and JoJo aim to create a soundscaped foundation on which the Voice of the Third may not only be heard but seen. With this combination it insures that no two performances are alike and instead breathes life into the moment, not only for the performers but for the audience.

Kuu, like other pieces conceived and performed by Theory Garden, is built on an evolving set of dynamic sonic processes architected by Mika Pontecorvo. This process architecture serves as both a ambient soundscape for the individual players improvisations and as a means of modulating the players' work.

For the purposes of this performance the primordial rhythmic relationship between the moon and the life forces it influences will be derived by looking at stages of gestational development at the time of the Quickening Moon and using that relationship to modulate the performance timbral and rhythmic structure. This will be accomplished by using the birthday and month of both the performers and audience to drive the generative processes of the electronics.

The Quickening Moon finds the VoxMaids asleep in the dark under the illuminated dark sky. Video projections change throughout the performance ritual, from darkness to twilight. Soundscapes provide a place for: the breath, the calling voice, for improv and ritual.

Song 5 ~ Haunted Opera
The Awakening of the Will
Posted by Polly Moller Springhorn at 8:14 AM No comments:

Paul would have been 50 today. 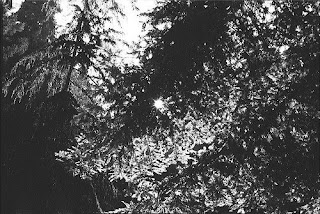 If only he were here to celebrate his big day. I would have thrown him a big party at my mom's house with lots of friends and family. And if he were feeling better, he might actually have enjoyed it, in an "aw shucks" kind of way. It's all wrong.
Posted by Polly Moller Springhorn at 3:02 AM No comments: