GOOD MORNING! Allow us to clear your sinuses... 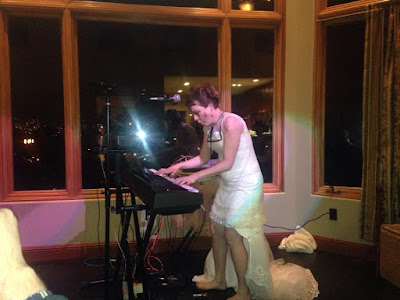 This is a picture of my friend and colleague Salane Schultz playing at a Surrey Street Salon Open Mic. There is another such Open Mic coming up on October 23 where I'll be playing in the duo Usufruct with Tim Walters. Tim and I are in Reconnaissance Fly together, and we took part in the Karelian Skies residency together, but Usufruct doesn't sound like either project.

Usufruct is actually a term from Roman law and refers to "the right to enjoy the use and advantages of another's property short of the destruction or waste of its substance." This describes my deconstruction of traditional songs and improvising the delivery of their words, pitches, and/or syllables in an unrecognizable, or somewhat recognizable way; combined with flute and bass flute improvisations, and Tim's electronic sounds coming from Supercollider.  And this is what we'll be doing at the Open Mic.  It's actually our second gig.  Our first was in Next Now's All Tomorrow's After-Parties this past Memorial Day weekend.

Surrey Street Salon is located at 231 Surrey Street in San Francisco, and the music starts at 7 pm.
Posted by Polly Moller Springhorn at 2:54 PM No comments:

Back in July, I participated in the Karelian Skies music residency and concert, in the small town of Nurmes, North Karelia, Finland along with Kim Bjørn, Petri Frestadius,Tony Gerber, Kimmo Kivelä, Otso Pakarinen and Tim Walters.  Sound and visual brilliance by Kimmo Heikkilä, Severi Kärki, and Panu Similä, and our video was shot and edited by Otso Pakarinen.  We all collaborated on the music and I wrote all the lyrics, inspired by the weather, wildflowers, moon, magpies and laughing gulls of Finland. Pop yourself a bowl of space popcorn and enjoy!
Posted by Polly Moller Springhorn at 1:01 PM No comments: