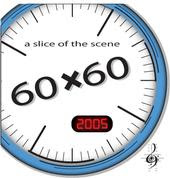 I'm having lunch with The Wonder That Is Daniel today, and I'm bringing him a copy of the new 60x60 CD. Thinking about it, I decided I should tell all of you about it too, again, so you can get one.

It's a double CD, containing both the 2004 and the 2005 60 x 60 international mixes. The 2005 CD is the one featuring my piece, "Cold Blood". Vox Novus and artistic director Rob Voisey did a great job of compiling a mix of styles, and perhaps the coolest thing about it is, if you don't like any particular track, you know it's going to be over in 60 seconds or less. If you're a new music connoisseur you will probably recognize many of the composers involved. So go over to CD Baby and get one!
Posted by Polly Moller Springhorn at 6:23 AM No comments:

Tonight I'm in Albuquerque on the night before the National Flute Association's 35th Annual Convention. Dinner was at Fei's Cafe across the street from the University of New Mexico campus, voted Best Vegetarian Restaurant by the readers of the Daily Lobo in 2006. And it was indeed tasty. There was hot & sour soup, pot stickers, veggie stew and curry stew.

I'm here to promote my flute quartet, "Remove Before Flight", which is being read on Saturday and which is available at the ALRY Publications booth in the exhibit hall. I'm also here to promote "Not Made of Stone", which is available at the Flute World booth, also in the exhibit hall. And, to reconnect with flutists I know but haven't seen in awhile. And, further, to hike at Petroglyph National Monument!

Also, on Friday and Saturday morning. I'll be trying yoga for the first time, courtesy of Laura Dwyer.
Posted by Polly Moller Springhorn at 7:27 PM No comments:

"Not Made of Stone" now available

“Not Made of Stone” is the debut album by Polly Moller & Company, and the fourth album of my original work. It's full of flutistry, space stations, spoken words, the souls of airplanes, singing, artificial hearts, chiming guitar, brain surgery, driving rhythms, desert road trips, virtuosic solos, and otherworldly atmosphere all lovingly served up by Polly, John, Dan, Will, Jim, and Jeff.

If you've pre-ordered and therefore already own this album, consider yourself encouraged to write a review for the CD Baby or iTunes page.

Thanks for listening!
Posted by Polly Moller Springhorn at 5:32 AM No comments: