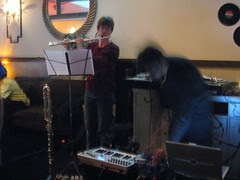 Here is the fast-moving Amar Chaudhary and me serving up the "Ode to Steengo".

Posted by Polly Moller Springhorn at 9:57 PM No comments:

This past Saturday I spent some time in the studio recording my 2008 60x60 submission. It's called "Abdominal Cyclist Ultra", and it's got lyrics bestowed on me by the gods of the Internet. Accordingly the piece is an impassioned plea to those gods, Highfalutin Melanie and Grain Bertrand, to grant me...something. And to protect innocent netizens from Other Abdominal Fluffy Cyclindric Crandall!

"A spokeswoman says a man described as 'trespasser' was hit by a northbound train around 5:15 a.m. near the Highway 85 overpass," reads the SFGate article.

Within two days I found out that I have a friend who knew the Trespasser. He and I were only three degrees apart. The Trespasser walked deliberately in front of the train, and he is now dead.

In one moment the Trespasser sentenced my friend, his parents, his own circle of friends and family, his ex-girlfriend, his fellow graduate students, the train engineer and the train passengers, and any passersby to a lifetime living with what he did. Judge, jury and executioner of all these innocent people, to say nothing of himself.

Maybe he thought all his loved ones would be better off without him. They aren't. They didn't sign up for their new existence without him. They didn't sign up for a lifetime of nightmares about his body crushed by a train. They didn't deserve the months and years of unbearable anguish, the rage, the confusion, the guilt, the insomnia, the momths or years of medication and its side effects, and the months or years of therapy (if they're fortunate enough to have those last two).

But it's possible the Trespasser wasn't thinking of his loved ones. It's possible his pain was so intolerable he could sense nothing else. It was 5:15 in the morning. He probably hadn't slept. A tunnel formed around him and he could see no way out but the train tracks.

I humbly ask anyone reading this to think of the Trespasser before acting on intolerable pain. I humbly ask you not to believe the demon that tells you that no one can help you, and no one has ever felt the way you do. I suggest you tell that demon that there are people in your life who would do anything, at any time, for any period of time, to save you. And there are people who know a lot more than your loved ones about how to save you and they're ready, willing, and able. I cannot state strongly enough that your loved ones are NOT better off without you. I cannot scream it loudly enough.

Please, no more Trespassers.
Posted by Polly Moller Springhorn at 7:08 PM No comments:

Recently I upgraded the memory in my laptop. I thought about it and realized I'd gotten the computer a new brain.

Then I thought about how Paul often said, when he was alive, that he wanted a new brain.

I didn't think of upgrading him before. Wish I'd thought of that. Wish it could have worked.

I would have powered him down and turned him over, and removed his battery by turning a coin in the slot.

Then I would have taken out each of the screws in his memory door and removed the bad chip, and installed the two brand new chips, maxing out his capacity with new clean memory. Then I'd screw the door carefully back on and the battery would go back in and I'd power him up again, and there he'd be, feeling so much better.

Wish I'd thought of that. But now it's too late.

My list of unanswerable questions is way too long to post but here are a few that come to mind:

Rachel told me that there is a Mexican saying about death, that each person actually dies three times. The first is when the body ceases to breathe. The second time is when the body is put in the ground. The third, and most profound and permanent, is when the living no longer remember the deceased's name.

With my blog I'm hoping to put off that third part for a while.
Posted by Polly Moller Springhorn at 12:01 AM No comments: