Just a month from now

It's feeling very real indeed. Rehearsals are scheduled, and I'm putting together program notes! Here, by the way, is the program itself as it stands now.

FIGHTS MONSTERS will ritually bring in the Mourning Moon through the extensive exploration of drones, room harmonics and standing waves to bring about a meditation on loss—all by candlelight.

The contemporary people of LAWSON are the descendants of an ancient civilization. For many generations the ancient Lawsonites lived at sea in ships, traveling and exploring the seemingly endless reaches of the ocean. While it has been forgotten exactly why the Lawsonites suddenly left the ocean, many believe a large storm decimated the majority of the population, and the few remaining people chose to leave the ocean forever. The descendants of these people have never seen the ocean.

In honor of the Mourning Moon, the Lawson ensemble will continue its tradition of performing the ancient songs of the fallen Lawsonite ancestors.

Ryan Gregory Tallman (b. 1977) is an electro-acoustic composer, noise artist, sound experimentalist, multi-instrumentalist and improviser. Tallman’s primary compositional focus is the manipulation and exploitation of the inherent resonant frequencies of acoustic spaces—rendering his work site specific and experiential. As a graduate from the Master of Fine Arts in Electronic Music and Recording Arts program at Mills College, Tallman studied under Fred Frith, Pauline Oliveros, Maggie Payne, Roscoe Mitchell, and Zeena Parkins.

FIGHTS MONSTERS,the SloMo-PoMo, Atmospheric Noise-Metal project of composer Ryan Gregory Tallman*, was brought to life in East Oakland, CA in the Autumn of 2008. FIGHTS MONSTERS has released albums on Planetarium Records and Subspine Records, and has another full-length album in progress.

Saxophonist Jacob Zimmerman recently completed his Masters Degree in Composition at Mills College in Oakland, where he had the privilege to study privately with Roscoe Mitchell and James Fei. In May of 2008 he graduated from the New England Conservatory of Music in Boston with a Bachelor of Fine Arts in Jazz Saxophone Performance. There he studied primarily with Anthony Coleman, Jerry Bergonzi, and Joe Morris. Demonstrating a firm knowledge of the history of the alto saxophone in jazz, classical, and improvised music, Jacob is a highly active performer working in a wide range of diverse musical contexts.

The newly formed Lawson Ensemble performs original music inspired by the rich cultural heritage of the Lawsonite people. Comprised of an exceptional cast of local improvising musicians, the project is focused on the navigation of a unique pitch network system recently developed by Zimmerman in his solo work. Current members include Drew Ceccato, Cory Wright, Matt Nelson (saxes), Matt Ingalls (clarinets), Theo Padouvas (trumpet), Rob Ewing (trombone), Michael Coleman, Dan VanHassel (keyboards), and Dan Good (electronics and trumpet). In performance the Lawson Ensemble collectively improvises varying textures of complex, slowly shifting counterpoint. Through the use of pre-composed material, improvisation, and a specific vocabulary of conducting cues the performers actively engage in the discovery of new formations of melody and phrasing, with an emphasis on shapes and contours. Notable influences for the project include Karlheinz Stockhausen’s opera music, Bill Frisell, Sun Ra, Anthony Braxton, and the improvisations of Lee Konitz and the “Tristano School.”
Posted by Polly Moller Springhorn at 5:00 AM No comments: 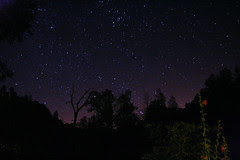 On my birthday hike 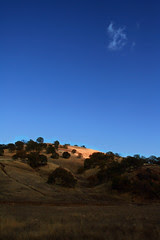 The little puff that shone a shadow
Originally uploaded by Dill Pixels
Posted by Polly Moller Springhorn at 6:07 AM No comments: