Me enjoying the Corn Moon show 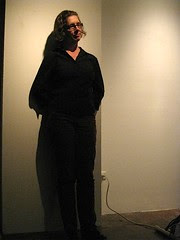 Thanks to Michael Zelner for the photo!

Posted by Polly Moller Springhorn at 12:51 PM No comments:

Amar and Polly have a duo gig at the Skronkathon

Yes we do.  At 6:25 pm this Saturday, August 28th, we will take our place in the all-day experimental music fest.  We kind of had to, because last year, we found out that Amar's review of LAST year's Skronkathon had been, well, spamogrified:

This will be the text we'll be working with.  It should be quite a thing.  Hope to see you there!
Posted by Polly Moller Springhorn at 5:00 AM No comments: 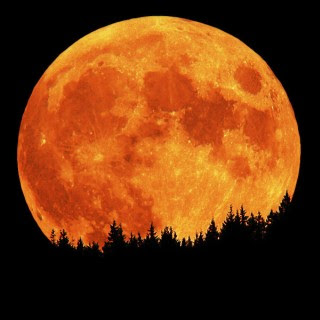 Waving fields of corn, prairie heat evaporating into the night, and the element of fire all inform the Corn Moon performances at the Luggage Store Gallery this Thursday, August 26th at 8:00 PM.
8 PM: Dina Emerson, voice
9 PM: Myles Boisen, guitar
THE PROGRAM:
8 PM:  To honor the Corn Moon Dina Emerson will be focussing on the element of fire, conceptually and sonically, metaphorically and literally. Dina has composed a short song cycle with both verbal and non-verbal sections.  The set will close with a song of celebration to illustrate the ripening of the elements to achieve fruition.
9 PM:  Myles Boisen was born in Omaha Nebraska, the land of corn. In the spirit of the Corn Moon and seasonal harvesting, his solo guitar performance gathers together diverse influences from the heartland; blues, country, improvisational hymns, the sounds of silk and husk.
PERFORMER BIOS:
Dina Emerson is a vocalist known for her chameleon-esque ability to sing in a multitude of styles as well as her ability to use her voice as an instrumental or sound effects source. She has worked steadily in New Music circles since 1989 when she joined the Meredith Monk Vocal Ensemble in NYC, with whom she toured, performed & recorded for over a decade. Dina Lived in NYC from 1988-2000 and worked with such artists as Tan Dun, Ken Butler, David Soldier, John Kelly & Company and many others. Dina lived in the SF Bay Area from 2002 to 2007 and during that time performed and improvised with many wonderful musicians, notably Jonathan Segel with whom she had a duo called Chaos Butterfly. She also taught voice at Mills College and managed a cheese shop in the SF Ferry building. Dina currently resides in Las Vegas, NV where she sings 10 shows a week for Cirque du Soleil's "Mystere," a job she first had in 2001 and has been performing again continuously since 2007. Dina thanks Polly Moller for the opportunity to stay in touch with the SF Bay Area music scene, which she misses mightily....
Myles Boisen is a guitarist, composer, improvisor, and record producer/engineer, best known around the Bay Area for his twin-necked twanging in The Splatter Trio, as well as musical exploits with The Club Foot Orchestra. Over the past two decades Myles has performed with John Zorn, Rova Saxophone Quartet, John Tchicai, Nina Hagen, Eugene Chadbourne, Vinny Golia, Myra Melford, Glenn Spearman, Ralph Carney, Eddie Marshall, and his own "Guitarspeak" ensembles. In collaboration with guitarists Fred Frith, Henry Kaiser, Elliott Sharp, Robert Fripp and others, he has developed a potent musical language that combines a wealth of traditional and contemporary styles, focusing particularly on prepared guitar technique and improvisation. Myles' discography numbers over 30 compact disc recordings, including his "Guitarspeak" disc, ten CD's with The Splatter Trio, and musical work for MTV, film director David Lynch, and CBS, as well as dozens of production and mastering credits on recordings by other artists from 1979 to the present.
Posted by Polly Moller Springhorn at 5:00 AM No comments:

Tunes for the listening

The Reconnaissance Fly MySpace profile has been updated with our three favorite spongs from the Outsound Summit, complete with Moe!'s drumming.
Posted by Polly Moller Springhorn at 9:22 AM No comments:

As the official blogger of Reconnaissance Fly (and many other contexts and endeavors), Amar goes to gigs ready to review and take pictures as well as play in the band.  Here's his official report on our Luna's Cafe show a week ago.
Posted by Polly Moller Springhorn at 9:35 PM No comments:

In the not-too-distant future... 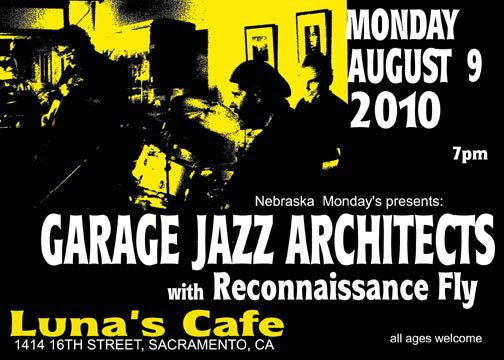 Posted by Polly Moller Springhorn at 1:26 PM No comments:

Of all the albums Matt Davignon has recommended to me, this is my favorite:  14 Footballers in Milk Chocolate, by MIDIsport.  In my mind it's the soundtrack for the ecstatic dancing of Octopus Paul.
Posted by Polly Moller Springhorn at 10:52 AM No comments:

An insider's view of Reconnaissance Fly and Genesis

Read it here, courtesy of Amar.
Posted by Polly Moller Springhorn at 12:45 PM No comments: