All performers are now confirmed for December 18th!

Yes, it's an exciting moment in the journey towards this concert.  There are 23 musicians in all, and here is the program as it stands now:

At the Harvest Moon show

My welcoming remarks were very brief, since this show came with its own Master of Ceremonies in Bernard Meisler from Sensitive Skin magazine. But Michael Zelner was there to photograph it nonetheless. :)

Posted by Polly Moller Springhorn at 4:21 PM No comments: 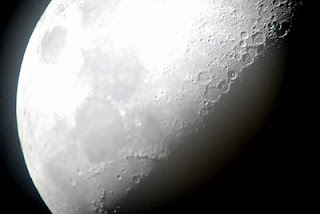 Kids begin school in the autumn because, when most of us subsisted through agriculture in the Northern Hemisphere, kids were needed to help gather in the harvest.  Once they were done with that, they could go to school.  September is therefore steeped in harvest and learning lore.

Dan Plonsey, Steve Horowitz, and Bernard Meisner have all of that in mind, plus the special knowledge that September 23rd is the birthday of the late great John Coltrane. Their Harvest Moon concert at the Luggage Store Gallery (1007 Market Street, near 6th Street, San Francisco) will serve up all they have harvested and learned from him as musicians.

Here are the particulars:

Dan Plonsey was born and raised in Cleveland, Ohio. He studied composition with Martin Bresnick and David Lewin at Yale, with Roscoe Mitchell at the Creative Music Studio, and with Anthony Braxton at Mills College. Since 1978, he has written several hundred works, mostly for his own ensembles, but recent commissions have come from The Jewish Music Festival (Berkeley), Real Time Opera (New Hampshire), the Bang on a Can People's Commissioning Fund (New York), Theatre of Yugen (San Francisco), the Museum of Children's Art (Oakland), Milkbar International Film Festival (Oakland), the Berkeley Symphony Children's Concert Series, and New Music Works (Santa Cruz). Plonsey was awarded several "Meet the Composer" grants, and an American Composers Forum "Subito" grant for the work with Theatre Yugen. Plonsey was one of just seven musicians nationwide to win a United States Artist Broad Fellowship in 2009. Much of Plonsey's music has been documented on more than 20 CDs. As a saxophonist, clarinetist, and oboist, he has recorded the music many others, including Anthony Braxton, Eugene Chadbourne, and Tom Waits. Plonsey is profiled in Tim Perkis's documentary film, Noisy People.

Steve Horowitz is a creator of odd but highly accessible sounds and a diverse and prolific musician. He has released 15 albums of original music ranging from classical to funk and back again. He penned the score to the indi-film sensation Super Size Me as well as other high profile TV and Video Game projects. Mr. Horowitz is a bass player and the founder of The Code International. Steve studied composition at the California Institute of the Arts with Morton Subotnik, Mel Powell, Steven Mosko, and Mike Fink, and has received performance underwriting and commissions from numerous organizations. For more information on Steve Horowitz, visit www.thecodeinternational.com.
Posted by Polly Moller Springhorn at 7:19 AM No comments:

It's gone up on San Francisco Classical Voice!
Posted by Polly Moller Springhorn at 12:33 PM No comments:

I ran into Peter Kaars last night and he informed me that he'd uploaded photos from the 2010 Outsound Summit.  Here's one of me during the Reconnaissance Fly set. I think this is when I say "Damned swindling young crook upset our whole lives!"
Posted by Polly Moller Springhorn at 11:14 AM No comments:

Me and Amar performing at the Skronkathon

While you're looking, admire the portion of the amazing proscenium arch you can see to the right of me. It's made entirely out of backlit 35 mm slides. It was a wonderful backdrop for the performances. Thanks to Michael Zelner for the photo!

Posted by Polly Moller Springhorn at 11:19 AM No comments: