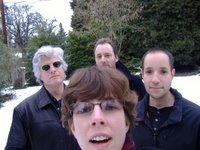 I'm back from Eugene, where the men of the Company and I converged to finish up our album, Not Made of Stone.

Four inches of snow fell on Eugene on Thursday. It was beautiful. Temperatures stayed and the 20s and 30s the next few days, which kept a lot of the snow from melting. It was colder than this Californian is used to. I've visited Eugene several times over the past 6 years, and that was the coldest it's been while I have been there.

It's so exciting to have it all wrapped up, all ten tracks. We recorded three songs this past week, and Jeff mixed and mastered everything. Jim arrived on Friday and recorded all three of his bass lines -- the original bass line for Duran Duran's "Save A Prayer", a new one for "Test Pilot's Lament", and big scary cathedral bells for "Death and the Maiden" -- which he made by putting the bass through a ring modulator. Jeff created drum tracks for "Save a Prayer" and "Test Pilot's Lament".

John arrived on Saturday and made short work of his rhythm and lead guitar for "Save a Prayer". He was psyched to see the snow still on the ground. I had hoped it wouldn't melt before he arrived, since he hadn't seen much of any snow before now.

Jim dug the autoharp percussion in "Test Pilot's Lament". I told him that was me banging on the autoharp with the tuning crank, but he said that's not what we should tell everyone. "You should say you flew in a Sufi high priestess and her three disciples to do the percussion," he said.

John and I took the same train back to the Bay Area. I read Bruce Sterling's "The Artificial Kid" and Rudy Rucker's "Spaceland". John read "The Stranger" by Albert Camus and "Animal Farm" by George Orwell. He also fended off the advances of a five-year-old future heartbreaker who drew him several crayon pictures.

Next will be to nail down the album artwork. I'm expecting it to be green, overall.
Posted by Polly Moller Springhorn at 8:33 PM No comments:

I'm told that two guys, one from Boston, Mass and one from Portland, Maine, came to the place in Oregon where I am now to start up the town. Each one wanted to name it after his hometown. They decided to flip a coin, and the guy from Maine won the toss.

Last night I met up with my friends, Rich and Daria. We had dinner at the Kalga Kafe and did six months' worth of catching up over tasty vegetarian food.

Then we went to the show at Holocene. First up was the Music Population Orchestra, consisting of nine members -- flute, viola, 2 violins, drums, clarinet, bari sax, and 2 cellos -- and a conductor. One of their missions, the conductor said, is to take classical music to venues where it wouldn't normally be heard. They played a set of works by a Norwegian composer whose name I didn't catch. They are good players, apparently with experience making classical music heard in non-recital halls. Listening to them, I felt like I was watching sessions for a film soundtrack. And there was, in fact, a video being projected on the wall, but I think it was unrelated.

I talked to the flutist afterwards. His name is John, and I hope he'll get in touch with me so I'll know his last name. It turns out we have some friends in common and background in improvisation and extended techniques. He's just moved to Portland from NYC.

Next was Iretsu, whose CD release concert it was. They had six members. They played psychedelic art-rock with videos projected behind them that looked like they WERE related to the music. Most of the members sang -- one of them reminding me of Thom Yorke. The violinist did a neat impression of The Edge's rhythm guitar playing in one tune. I liked their interesting offbeat arrangements. I bought the CD they were releasing, but I haven't had a chance to hear it yet.

In other news, K has taught me how to make espressos from scratch with all the steps!
Posted by Polly Moller Springhorn at 10:31 AM No comments: