Wind Moon 2010 this Thursday in SF 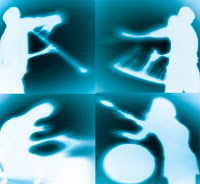 On Thursday at the Luggage Store Gallery (1007 Market Street, San Francisco), it's all about the wind, and its moonlit travels through tubes.

The band will present the Wind Moon Suite, an elemental arrangement featuring: On the Weight of the Wind, Beehive Memory, Knife In The Fog, Vilia's Whisper, and others.

Wind and sound are both the movement of air, and it is air, one aspect of the Invisible, that connects all things. The movement and presence of air and the invisible; the shaping of matter and events by the cycles of the moon: these are realities that we can benefit from paying more attention to. In sonically portraying the Wind Moon, we will be reminding ourselves of the core perspective of the group: The instruments themselves are treated with reverence and are given as much if not more command over the path that the music takes. Inasmuch as metal particles or stalks of bamboo *want* to become instruments, at the point at which we discover them, the gongs and shakuhachi themselves are approached in a highly collaborative manner, i.e. letting sounds emerge from them, guiding rather than forcing, generally unifying with the instrument as much as possible. This requires a complex skill set that intertwines the rational, problem-solving and skill-acquiring mind with the realm of uncertainty, chaos, and intuition. There is an animistic, primordial perspective at play here; the idea of letting the instruments play what they want to play: guiding sounds from sound sources, building directly upon the intentions of the instrument maker, builder or designer, thus creating a kind of intentional feedback loop of a creative process combining imagination and utility.

Ghost in the House is:

The music of Ghost in the House is a soundtrack for the subconscious. It could suggest a murder mystery, a visitation in a dream or a cataclysmic storm.

Sabbaticus Rex is an ensemble rooted in the supremacy of sound over music, the triumph of tone over time and thought. This process uses haunting and beautiful acoustic instruments and methods: overtone gongs, shakuhachi (bamboo Zen flutes), Taimu (bass) shakuhachi, throat-singing, and the Bazantar (an upright bass with sympathetic strings). This is sound, but not music. It is primordial easy-listening for dinosaurs: slowly shifting elemental dialogues between fat flutes and big gongs.

Through spontaneous, sustained sound structuring, these sources combine to form a resonant, expansive and raw environment. Creating music with a majority emphasis on slow-evolving sound and texture, there is no narrative, socio-political, or otherwise extra-musical plot or agenda involved with this non-music. That being said, it does derive form and perspective from elements such as breath, overtone/harmonic resonance, imagination, and simplicity within chaos.
Posted by Polly Moller Springhorn at 5:00 AM No comments:

...will be here, on May 15th.  It will be the debut of our new quartet lineup -- me, Amar, Tim, and guitarist Noah Phillips.
Posted by Polly Moller Springhorn at 1:36 PM No comments: I can always count on Amar to post gig reports.  I am definitely never performing in those jeans again!
Posted by Polly Moller Springhorn at 10:26 AM No comments:

Thanks to Amar, whose stationary video camera got pointed at the action and turned on.

In duo with Moe! Staiano this Thursday in SF

So, I am artistically immersed in found text, especially spoetry.

There's a new "form" of spoetry going around lately, which I'm sure represents the latest innovation that will get the spammer's message past email filters.  It builds on a spoetry form from last year -- words randomly arranged in groups of two or four -- and now features not just random words, but words divided in random places.  The result is words divided into smaller unrelated sound units.

I've collected four of these spoems and I'll be performing them for the first time this Thursday, April 8th at the Luggage Store Gallery.  Joining me will be mad genius percussionist and found objects artist Moe! Staiano.  He's played in my Flip Quartet a couple of times, but we have never improvised together before, and I feel like he's the guy to help me squeeze maximum Dadaist meaning out of the new spoetry form.